The virus pandemic has certainly had an impact on all of us. Not being able to meet with my patients in person has required a major clinical adjustment. Thankfully, telemedicine has provided me with the ability to provide necessary ongoing treatment. But I also know firsthand how difficult and taxing social isolation and sheltering in place can be.

What has made this viral illness so stressful? After all, we have been dealing with annual episodes of influenza for decades. We also successfully made it through the fears of the bird flu, SARS, and swine flu. What makes Covid 19 so special and so scary? Covid 19 is called a novel virus because it is a protein that is totally new to the world’s human population’s immune systems. Our immune systems therefore do not have the capacity to adequately fight off this infection. The elderly and those with chronic illnesses are especially at risk. But 20 to 65 year olds are not immune from infection and risk severe illness if they are not cautious and follow CDC guidelines.

We can all agree that there are reasons to be fearful of this unique virus. We would all agree that sheltering in place and social isolation plays a role in our unease and insecurity. The inability to see loved ones and friends certainly takes a toll. Job loss and the subsequent financial stressors contributes as well. Lack of definitive treatment or a protective vaccine adds to our worries. But the level of emotional unrest seems to be much greater than what these issues would suggest. So what accounts for our level of apprehension? 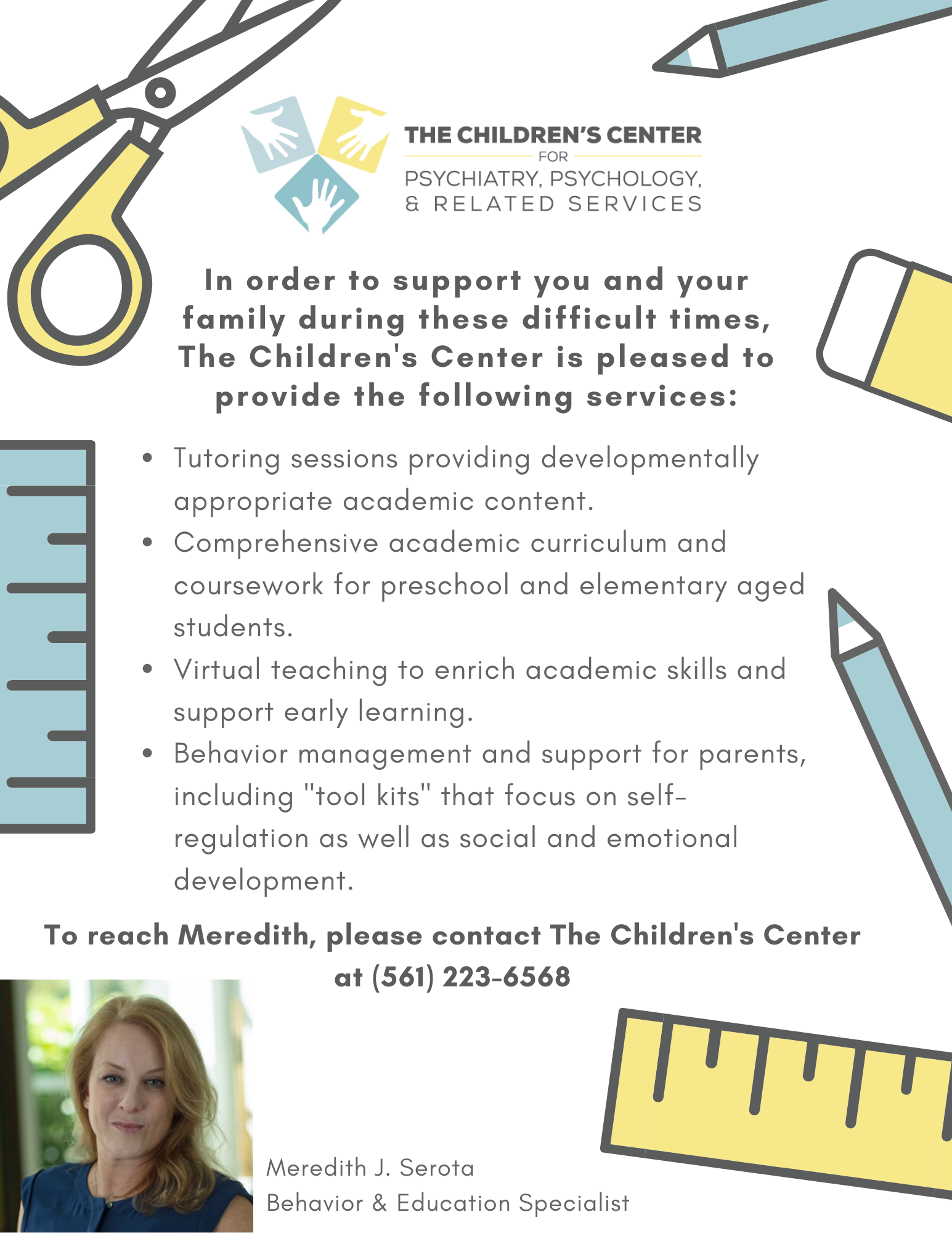 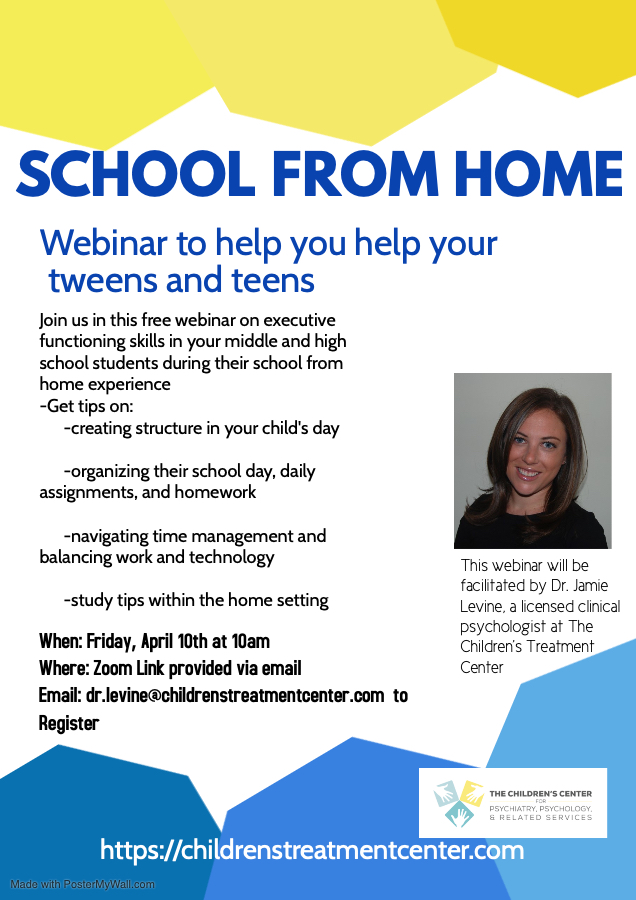 We hope that you, your children and families are doing well in the midst of this unprecedented time. After carefully considering the CDC guidelines, we at The Children’s Center have decided that we will no longer be conducting therapy in our office at this time.

In good news, we have the capability to conduct appointments either over the phone or via Telehealth. We are happy to keep all appointments during this time. If you already have a scheduled appointment but you would prefer to postpone your to a later date or an alternate time, we are happy to do that as well.

We greatly appreciate your understanding during this difficult time. Please do not hesitate to contact us with any questions or to schedule an appointment at (561) 223-6568.

We are all so “connected” nowadays. Everywhere you look, you see people of all ages engrossed in the online world. Children are asking for cellphones at younger and younger ages, while parents often seem so attached to their devices that they barely pay attention to their children. This brings up the question of how being connected to your own phone and devices might be affecting your child.

A colleague recently told me what she had witnessed during her last dental visit: a father came in with two young children under the age of 6. All three of them were on their own devices (dad had a phone, each child had an iPad).

When the little boy was being examined, he was told he had his first loose tooth. The child was so excited and he kept exclaiming, “Daddy! Daddy, my tooth is loose!”

The father barely acknowledged this milestone, even after several attempts by his son to get his attention. Finally, although he did not even look up from his phone, he muttered, “Uh huh, that’s great.” My colleague’s heart broke when she saw how disappointed the little boy was with his father’s lack of response.

In effect, the father had just told his son that whatever he was looking at on his phone was much more important than his child.

Are Parents Addicted To Their Phones?

One of the most quickly growing areas of clinical research and treatment implementation is for people who are considered to be overcontrolled. What does being overcontrolled mean, and what does it have to do with feeling socially anxious? The concept of self-control refers to the ability to inhibit problematic behaviors. This is generally accepted by our society as a positive thing to have! It is true that to an extent, being overcontrolled can be very adaptive and helpful. Overcontrol is associated with the ability to delay gratification, follow rules, and valuing accuracy and fairness. However, when these traits are very pronounced and overemphasized, they can become problematic and affect our mental health. It’s like having too much of a good thing.

Social and Emotional Impact of Overcontrol

It’s no secret that people are somewhat “addicted” to their screen time. Just look around you at any restaurant and you’ll see families and friends interacting more with their phones than with each other. The same hold true for almost anywhere you go: some people can’t even take their eyes off their screens when driving or walking, which has resulted in numerous accidents and deaths.

In a 2018 study done by the Pew Research Center, 54 percent of teens aged 13 – 17 said they were concerned about the amount of time they were spending online and on their phones. In fact, they were so alarmed about it that “Some 52% of U.S. teens report taking steps to cut back on their mobile phone use, and similar shares have tried to limit their use of social media (57%) or video games (58%),” according to the researchers.

Parents don’t do much better. The study reported that, “36% say they themselves spend too much time on their cellphone.”

Because of all the time spent watching screens, research is being done to find out the physical and emotional effects it might be causing for us.

What Does Too Much Screen Time Do To Your Brain?

Our very own Dr. David Gross recently received the Lifetime Achievement award from Sierra Tucson! Watch the full video below.

As more states legalize the possession and use of marijuana, we are beginning to get a clearer picture of the effects it can have on mental health. While more research is needed, we know there has been an upswing in suicides and mental health disorders in the states that have legalized the drug. So, what are the mental health risks of marijuana use?

Sadly, bullying is more common than we like to think. Kids belittle and pick on each other for many reasons. In the past, adults often wrote off bullying as “kids being kids”, but we have learned that being subjected to this type of abuse can be devastating for the targeted child. And, now that computers and social media are commonplace, a bully’s harassment doesn’t have to be done in person – kids can be besieged by cyberbullying, too. So, how does online bullying affect a child’s mental health?

Cyberbullying can cause a child to have more physical problems (sleep disturbances, headaches, stomachaches) and issues with self-esteem. A child who is bullied is less able to learn and adjust in school and more likely to have “depression, anxiety, sleep difficulties, lower academic achievement, and dropping out of school” as reported by the Centers for Disease Control and Prevention (CDC). In extreme cases of online bullying, children have even been so traumatized that they have taken their own lives.

In addition, bullying also affects the child who is carrying out the harassment, resulting in a higher risk of substance abuse, problems in school, and violence in their teen years and in adulthood.

Children Can Now Get The Covid Vaccine, But Some Parents Are Anxious

Why It Is Important To Set Limits For Children